Spotting the Unusual in the Usual: Maria and Natalia Petschatnikov 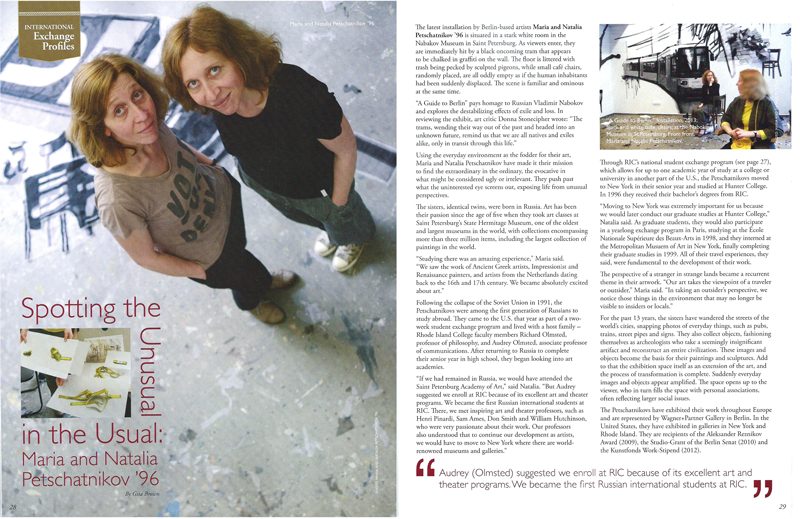 The latest installation by Berlin-based artists Maria and Natalia Petschatnikov ’96 is situated in a stark white room. As viewers enter, they are immediately hit by a black oncoming tram that appears to be chalked in graffiti on the wall. The floor is littered with trash being pecked by sculpted pigeons, while small café chairs, randomly placed, are all oddly empty as if the human inhabitants had been suddenly displaced. The scene is familiar and ominous at the same time.
“A Guide to Berlin” pays homage to Russian Vladimir Nabokov and explores the destabilizing effects of exile and loss. In reviewing the exhibit, art critic Donna Stonecipher wrote: “The trams, wending their way out of the past and headed into an unknown future, remind us that we are all natives and exiles alike, only in transit through this life.”
Using the everyday environment as the fodder for their art, Maria and Natalia Petschatnikov have made it their work to find the extraordinary in the ordinary, the evocative in what might be considered ugly or irrelevant. They push past what the uninterested eye screens out, exposing life from unusual perspectives.
The sisters, identical twins, were born in Russia. Art has been their passion since the age of five when they took art classes at Saint Petersburg’s State Hermitage Museum, one of the largest museums in the world, with collections encompassing more than three million items, including the largest collection of paintings in the world.
“Studying there was an amazing experience,” Maria said. “We saw the work of Ancient Greek artists, Impressionist and Renaissance painters, and artists from the Netherlands dating back to the 16th and 17th century. We became absolutely excited about art.”
Following the collapse of the Soviet Union in 1991, the Petschatnikovs were among the first generation of Russians to study abroad. They came to the U.S. that year as part of a two-week student exchange program and lived with a host family – Rhode Island College faculty members Richard Olmsted, professor of philosophy, and Audrey Olmsted, associate professor of communications. After returning to Russia to complete their senior year in high school, they began looking into art academies.
“If we remained in Russia, we would have attended the St. Petersburg Academy of Art,” said Natalia. “But Audrey suggested we enroll at RIC because of its excellent art and theater programs. We became the first Russian international students at RIC. There, we met inspiring art and theater professors, such as Henri Pinardi, Sam Ames, Don Smith and William Hutchinson, who were very passionate about their work. Our professors also understood that to continue our development as artists, we would have to move to New York where there are world-renowned museums and galleries.”
Through RIC’s National Student Exchange Program, which allows for up to one academic year of study at a college or university in another part of the U.S., the Petschatnikovs moved to New York in their senior year and studied at Hunter College. In 1996, they received their bachelor’s degrees from RIC.
“Moving to New York was extremely important for us because we would later conduct our graduate studies at Hunter College,” Maria said. As graduate students, they would also participate in a yearlong exchange program in Paris, studying at the École Nationale Supérieure des Beaux-Arts in 1998, and they interned at the Metropolitan Museum of Art in New York, finally completing their graduate studies in 1999. All of their travel experiences, they said, were fundamental to the development of their work.
The perspective of a stranger in strange lands became a recurrent theme in their artwork. “Our art takes the viewpoint of a traveler or outsider,” Natalia said. “In taking an outsider’s perspective, we notice those things in the environment that may no longer be visible to insiders or locals.”
For the past 13 years, the sisters have wandered the streets of the world’s cities, snapping photos of everyday things, such as pubs, trains, street pipes and signs. They also collect objects, fashioning themselves as archeologists who take a seemingly insignificant artifact and reconstruct an entire civilization. These images and objects become the basis for their paintings and sculptures. Add to that the exhibition space itself as an extension of the art, and the process of transformation is complete. Suddenly everyday images and objects appear amplified. The space opens up to the viewer, who in tern fills the space with personal associations, often reflecting larger social issues.
The Petschatnikovs have exhibited their work throughout Europe and are represented by Wagner+Partner Gallery in Berlin. In the United States, they have exhibited in galleries in New York and Rhode Island. They are recipients of the Aleksander Reznikov Award (2009), the Studio-grant of the Berlin Senat (2010) and the Kunstfonds Work-Stipend (2012).